The Shalom God Has Envisioned

Posted on September 3, 2019 by kurtesslinger

“Kurt, thank you for sending us the translation of the communiqué last night; however, we have made some changes again. We need you to spend your lunch translating the new version so that we can have a draft ready for the forum discussion immediately after lunch!” Before I was able to begin drinking my coffee at breakfast, this was the greeting I received from my supervisor at the National Council of Churches in Korea (NCCK), Rev. Shin Seung-min. We were several days into a meeting of the Ecumenical Forum for Peace, Reunification, and Development Cooperation on the Korean Peninsula (EFK), and each forum meeting releases a communiqué on the state of the Korean peace process. I had finished translating the first version, written by the Korean Christian Federation (KCF) from North Korea, and sent it to Rev. Shin at 3 a.m. the night before, but the South Korean delegation wanted to make a few revisions before proposing it to the full international forum. So back to work I went! 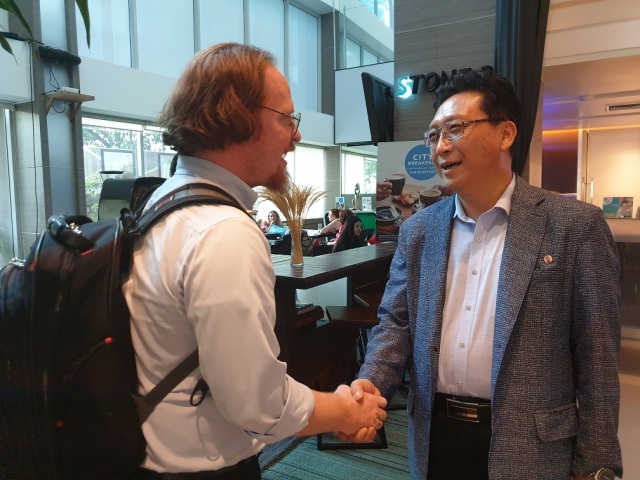 This meeting in Bangkok, Thailand, was the second time I had attended a meeting of the EFK, but it was the first time I had attended since being appointed its coordinator. I also quickly became, ostensibly, the de facto translator of Korean documents into English. Rev. Kim Jin Yang, a Korean working for the World Council of Churches, joined me for part of that lunch to help smooth out the language. Most importantly, Ms. Yun Mi, the coordinator for international affairs of the Central Committee of the KCF, was on hand to make sure that our English translation matched the intent of the original Korean communiqué. The three of us together made quick work of translating the revisions proposed by the South Korean delegation so that both South Koreans and North Koreans would be able to sign off on the final language.

The Korean peace process has come to a frustrating halt since the NK-U.S. summit in Hanoi in February. A surprise meeting between Chairman Kim and President Trump, brokered by South Korean President Moon, gave some hope that a way through the deadlock might be found, but we are still waiting for that to materialize. In the meantime, the NCCK of South Korea and the KCF of North Korea have pledged to continue finding ways to build off their example of gradually building trust through humanizing relationships and meetings that stand in sharp contrast to the demonization of North Korea we might see all across the spectrum of U.S. media. These forums move beyond simply enjoying the time of meeting together — they include engagement in advocacy through the drafting of communiqués that present the ecumenical movement’s requests for peace on the Korean Peninsula. Members can then share these communiqués with their representatives in each respective government.

This year, the communiqué lifted up the initiatives taken by the leaders of North and South Korea at both inter-Korean summits, Panmunjom and Pyongyang. The leaders committed to taking mutual steps toward rebuilding each other’s trust, such as demolishing guard posts throughout the DMZ. The communiqué also celebrated the steps taken by North Korea to implement the Singapore agreement, while lamenting the lack of corresponding steps from the U.S. As we have seen, North Korea has gone so far as to demolish a nuclear testing facility, while similar demolitions on the part of the U.S. have yet to materialize. In particular, the communiqué notes continuing U.S.-South Korea joint military drills as problematic: “We … denounce the joint military exercises and oppose them as a key factor that keeps the situation tense on and around the Korean Peninsula.”

Corresponding to the tension of the negotiations between the U.S. and North Korea, the atmosphere of the forum was generally more tense this year; hence, the deliberations over language in the communiqué took longer than usual. Several partner churches shared examples of how their projects for people-to-people exchanges and resource sharing with North Korea have been hindered and sometimes outright blocked by U.S. interpretations of sanctions. The United Methodist Church invited the KCF to a roundtable conference in the U.S. last year, but the U.S. State Department denied their visas. Another partner, the American Friends Service Committee, tried to send TB vaccines, but the shipment was blocked because it included the needles necessary for administering it. These sanctions were designed to kill North Koreans. Another organization was told they needed to close their office in Pyongyang, North Korea, where they had operated for several decades, or else the bank would close their account due to warnings from the U.S. Department of the Treasury.

Representatives from partners in the USA, Canada, and Finland discuss the effects of sanctions on their programs for humanitarian resource sharing and people-to-people exchanges.

Our EFK meeting sought to close with some notes of hope as we discussed plans for NCCK events to be held in the U.S. in June of 2020 to commemorate the 70th anniversary of the outbreak of the Korean War. However, we just received news that all South Koreans who have visited North Korea since 2015 will be denied the usual 90-day tourist visa upon arrival, and they will instead have to apply for a special visa that requires in-person interviews at the U.S. embassy for any kind of visit to the U.S. This would include almost every member of the NCCK involved in the work of reconciliation and reunification.

Rev. Kang, from the North Korean Christian Federation, giving the blessing and sending at the closing worship service of the EFK.

Despite the setbacks, we continue working to find more opportunities for people-to-people encounters throughout the world so that more of our partners can truly see the need for all sides of the conflict to engage in mutual trust-building rather than unilateral demands that require only one side to take actions toward denuclearization while the other side continues practicing attacks in joint military exercises next door.

As humans, we may find ourselves leaning toward a desire for control, or revenge, or protecting what we assume to be our own. Nevertheless, as Christians we are called to reconciliation and to acknowledge the light of Christ within all God’s children. This is the path that will most likely lead to an end to violence and the end of the war, even if it means struggling to understand each other’s language. We thank you all for continuing to support us through your prayers and donations. May we continue on this journey together toward the shalom that God has envisioned.