Following the SK President to NK

Posted on December 17, 2018 by kurtesslinger

Merry Christmas to you all. We hope you find the story in this letter to be an example of the hope of Advent. Despite the peace process being currently stalled because of the US increasing sanctions on North Korea, releasing false “intelligence” in its media, and refusing to consider trust-building a mutual responsibility; nevertheless, we believe the constant progress made between the two Koreas will eventually lead the US and the rest of the world toward an irreversible peace. This story from the NCCK is a testament to that hope!
>>>>>>>>>>>>>>>>>>>>>>>>>>>>>>>>>>>>

On September 19, a crisp Wednesday evening, South Korean president Moon Jae-in stood before a large stadium audience in Pyongyang, North Korea. He gave a speech that ended with “we had lived together for 5000 years but apart for just 70 years. Here, at this place today, I propose we move forward toward the big picture of peace in which the past 70-year-long hostility can be eradicated and we can become one again. Chairman Kim Jong Un and I will firmly clasp the hands of 80 million Koreans in both the North and South and move forward to create a homeland anew.” Then, around 150,000 North Koreans gave the South Korean president a standing ovation. This was the first time a South Korean president had ever given a speech in North Korea.

Greetings, in the name of Jesus Christ, who is our peace. Fall is beginning to chill the land here in Korea, and yet some extraordinary events are slowly thawing the Cold War atmosphere on the Korean peninsula. In September, President Moon Jae-in visited Pyongyang for the second inter-Korean summit since he won the South Korean election in 2016. Since that election, his leadership has brought hope that the state of war might finally end soon. For this summit, the leaders of both Koreas focused on the agreement in section 1.4 of the Panmunjom Declaration, signed at the first inter-Korean summit in April: “South and North Korea agreed to encourage more active cooperation, exchanges, visits and contacts at all levels in order to rejuvenate the sense of national reconciliation and unity … in which participants from all levels, including central and local governments, parliaments, political parties, and civil organizations, will be involved.” 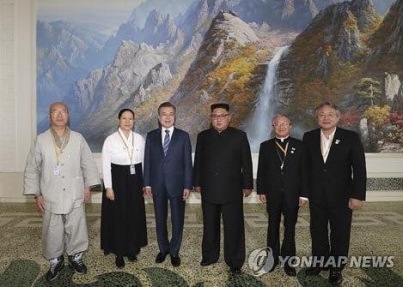 Thus my boss, the general secretary of the National Council of Churches in Korea, Rev. Lee Hong-jung, was invited to North Korea to join over 100 other representatives of various levels of Korean society. Rev. Lee represented Protestant Christians in South Korea, and he was joined by representatives of South Korea’s other three main religions: the archbishop of the Catholic Church of South Korea, the head monk of Korean Jogye Buddhism, and the Head Dharma Master of Korean Won Buddhism. They met their North Korean counterparts — the leadership of the Korean Federation of Religionists that includes the Christian Federation, the Buddhist Federation, the Cheondoist Church, and the (Eastern) Orthodox Church Committee of North Korea. There they sat down together and held a discussion about how to lead their respective communities into further cultural exchanges across the border of division.

When Rev. Lee returned from North Korea, I asked him where he saw signs of hope from the summit. He responded, “I could feel intuitively my dream for Korea being realized, a dream for harmony overcoming differences. I could feel this dream being realized in the transformation of North Korean society that I observed since my last visit. I could see that North Korea’s social system is not a system of fossilized immaturity, but a fluid, organic system that responds to new trends and pursues change in accordance with the flow of history.”

Rev. Lee and the civil society delegation was hosted by Ms. Kim Yo Jong.

Rev. Lee said that he also saw hope in the way that Chairman Kim Jong Un took risks that would have been unthinkable for an unassailable dictator. Not only did Chairman Kim open up the possibility for a South Korean president to speak to the North Korean people unfiltered, but he bowed his head when greeting President Moon in front of the stadium audience, and then he spoke honestly about scarcity in his country, acknowledging its weakness. This does not mean that everything is perfectly fine — 70 years of war and hatred cannot be healed overnight — but surely a new way and a new hope have now opened.

Rev. Lee telling his stories to Kurt, so he can share them with you.

I also asked Rev. Lee what concerns might remain for the future of the peace process, and where our communities should focus in the future. I especially asked if he had any suggestions for US Christians such as you who support Hyeyoung and me. He explained that he hoped the US will no longer use its force as a great power to make one-sided demands but will instead begin to follow the peace process with reciprocity. Corresponding measures would significantly increase the mutual trust and help guarantee that the Korean peninsula will not turn the clock back to the time before the Panmunjom Declaration of April.

Rev. Lee also acknowledged that Korean Christians have a similar responsibility. So far, the South Korean Church is within itself divided into a South-South conflict (South Koreans against other South Koreans) that could easily persist even after a peace treaty is signed. One side is using missionary activities, refugee ministries and condemnation of human rights violations to “reconstruct” a North Korean Church based on the implicit goal of abolishing the current North Korean system. The other side honors the existence of the Korean Christian Federation in North Korea. Its missions focus on a theology of peace and relationship-building to restore mutual trust that cultivates an environment that is necessary both for a peace treaty to end the war and as a first step before seeking to end human rights violations in both South and North Korea. He sees hope in those within the Korean Church seeking reformation in the spirit of seeking confession and a renewal of a commitment to God’s vision for peace.

Rev. Lee said that his visit to North Korea, Pyongyang, and Mt. Baekdu reminded him that “Christ is a God of peace. It is God who heals and reconciles enemies, breaking down walls within God’s own body, God’s people. In this body there is equality and love, where justice and peace kiss each other; there God makes the two into one, harmonizing differences. This God is a God who lies upon the cross, traversing the gap of Korean division and the original sin of the South-South conflict, inviting us all to step with him across the boundaries of Korean division.”

I include this pic with Rev. Lee where our colleague got some shots of us giggling through our conversation about the silliness of trying to have a picture taken of us just talking. I share it also because he sent me a note afterward to say, “Thank you for laughing with me, today, Kurt.” I can imagine he might not get all that many chances to laugh with all his responsibilities as general secretary of NCCK. I suppose if this is something I can offer to our partners here, then I am of some value in this assignment!