Let’s not be shaken by this

Posted on September 6, 2018 by kurtesslinger

“What are you all doing here now?” A middle-aged man nervously shouted at a group of people who were doing a “human chain” protest in front of the naval base in Gangjeong village in Jeju. The man started an argument with the participants in the “human chain” and then showed off his anger by aggressively taking off his shirt. At that moment, I was doing the peace dance with the people who were participating in the Inter-Island Solidarity Peace Camp. I became a bit nervous because of the conflict happening right next to me, but I continued to dance the peace dance with other camp participants. The conflict did not last long, but I was very confused, nervous, and frankly frightened. A lot of thoughts came to my mind, wondering, “Who was that man? Why is he so angry? Will he use violence to attack us?”

Terra, who was leading the dance, said: “Let’s not be shaken by this, let’s concentrate.” Even in this confusing moment, we were able to dance to the end because of fellow protestors who were there together to encourage one another. However, the question that the man asked, “What are you all doing here?” stuck with me. Why I am dancing here in front of the naval base in a small town called Gangjeong village with a group of strangers whom I just met three days ago?

Gangjeong village is a tiny town located on the southern tip of Jeju, also known as a Peace Island, in Korea. The Korean name, Gangjeong, is translated literally as, “Village of Water,” and it refers to the abundance of surface fresh water in the area, a rarity on this island of volcanic rock. The clean water from the Gangjeong stream makes nearby farmland some of the most fertile on the island. However, there has been an ongoing nonviolent struggle to stop the construction of a Jeju naval base project that was forced upon Gangjeong Village against their will.

The southern sea of Jeju is a critical geopolitical point linked to the Southeast Asian Sea. Since 2007, the South Korean government has been aggressively trying to build a naval base on top of the village and its precious environment despite the opposition of a strong majority of the villagers (94% of voters). The Jeju naval base construction project was pushed forward by the government without proper democratic consultation. A wide range of human rights abuses against peaceful protesters have been taking place in Gangjeong village on a daily basis to ensure that the construction goes ahead despite strong local opposition. This project is not only destroying the natural environment, but it is also jeopardizing the wellbeing and health of villagers. The once peaceful and prosperous seaside community of Gangjeong is now falling to pieces as the very foundations of its livelihood, the water and the land, are being destroyed. More importantly, the Jeju naval base project will contribute to the further militarization of the Asia Pacific region, increase tensions, and add to regional insecurity.

In light of this, I participated in the “2018 Inter-Island Solidarity Peace Camp,” which was held from July 25 to 29 for four nights and five days. This camp is made up of activists from the islands of Jeju in Korea, Okinawa/Ishikagi in Japan, Taiwan, and Hawaii. Camp participants gather together for the peaceful, anti-nuclear, and unarmed peoples of each island to talk about the situation of their island and share common struggles. This year, the camp was made richer with attendees from Canada, the United States, Hong Kong, Ireland, Korea, and Japan. The camp, which first started in 2014, celebrates its fifth anniversary this year. This international Peace Camp has continued for five years because participants share a common struggle with military bases being built indiscriminately on each island due to pressure from the state power. I have known about this camp for years, but this was my first time attending. What I felt throughout the camp is that the pain we see in Gangjeong village is deeply connected to the pain of other islanders. We have all realized that opposing the militarization of our islands should not come from a local nationalistic point of view, but that people from around the world must work together to build an unarmed “sea of peace” for peaceful coexistence.

I found out later that the angry man who yelled at the “human chain” was there to visit his son who was serving at the naval base. After I learned that, I could understand his feeling to an extent. Our non-violent act of achieving peace can be understood as offensive to some. To narrow the gap of misunderstanding, we must continue to dance, sing, and maintain our solidarity through constant dialogue. Peace in Gangjeong is not comfortable. It is very tiring and hard and sometimes tedious. 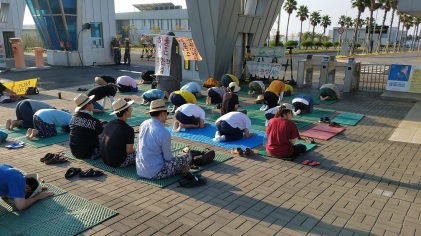 Villagers and activists pray every morning at seven o’clock while bowing 100 times in their desire for peace, and they protest with dance and song as a “human chain” from 12:00 to 1:00 every day. And it’s been more than 4000 days since they began this protest. It was the same when I first visited Gangjeong five years ago. However, this persistent direct action is a new inspiration for some and challenge for others. It seems that these tedious processes are inevitably necessary to achieve peace. I believe that people encountered in this process are gathered and added to create the wind of peace. The reflection that I had throughout the camp was, “How will I carry out my actions in my daily life as I desire peace?” I did not get a clear answer by the end. However, more importantly, I met friends and colleagues who will say, “Let’s not be shaken by this, let’s concentrate” to one another as we walk this journey together to find the answer.

Thank you for your support and prayer. I hope that you will hold our hands to walk and dance with us in this peace journey. May God’s peace be with you.

This entry was posted in Uncategorized. Bookmark the permalink.