We take the YAVs on four big study trips/retreats during the one year they live with us in Daejeon. Our first trip was to Busan for the World Council of Churches Assembly. This time we went to Jeju Island. It is Korea’s largest island, and it hangs off the southern tip of the peninsula. It is known these days as a vacation/resort location, particularly for honeymoon couples. However, we went to learn about some of its darker history and some of the ways the islanders continue to deal with sufferings of the past. We spent 6 nights and 7 days there learning about the history of the island, it’s connection to the history of the mainland, and it’s unique culture that differs a bit from the mainland. I’ll cover different parts of our week there over the course of several posts.

This memorial was created to remind us all of the massacre that began on April 4th, 1948 in response to an uprising against the US Military Government and the local leadership it set up in Jeju. Over the course of 7 years an estimated 20,000 to 30,00 people were killed or disappeared. Every single family on Jeju was affected by this massacre, and its ripples continue to influence lives today. I will try to give you a brief description of the context in this post. I will also direct you to other places where you can learn a bit more.

A Truth Commission to determine exactly what happened during those seven years was only created as recently as the year 2000 in the wake of a successful Korean Democracy Movement (1987) and did not conclude its efforts until 2009.

The Truth Commission found that the spark of particular unrest came from a March 1st, 1947 demonstration. The demonstration commemorated the March 1st Independence Movement that began under Japanese occupation. They also demonstrated on behalf of the hope for a unified country, thus in protest of the US Military Government plans to hold unilateral elections in southern Korea for a separate government. Korean National Police fired upon the demonstrators killing six and leaving six severely injured. Workers and farmers across the island responded with a general strike. The US Military Government and the Koreans they appointed in leadership on Jeju decided this was the work of Soviet/northern Korean communists so they moved to suppress the strikers. The group of islanders decided that only armed retaliation could break the suppression, so they attacked a police station on April 3rd, 1948. The US Military Government, it’s Korean appointees and the subsequent South Korean Government then began an operation that included brutal suppression of the entire island that lasted from 1948 until 1954; this suppression included torture, illegal imprisonment, mass executions, and disappearances. I will mark the most noteworthy aspects of those 7 years. 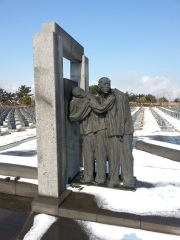 A statue at the grave site marking the 4,000 or so known victims whose bodies were never found.

This statue commemorates a mother and daughter whose bodies were found in a snowbank having been gunned down by government forces.

Through all of this pain and sadness we get a sense of the 한 (han) of the people of Jeju. Han refers to a deep kind of unjust suffering and the scar it leaves on people. Nevertheless, the memorial also honored the bravery and the hope of those who finally came out to tell their story bringing the truth to light. We pray that their courage will give us the strength to struggle for peace and life in the face of death. The Island of Jeju has, since the end of the Truth Commission, been declared an Island of Peace for the future. May it be so.